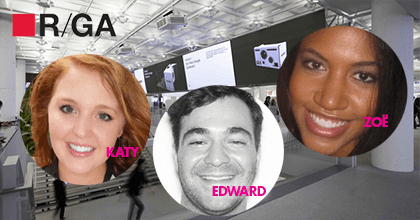 When it’s just right, you know it. Katy Moseley, Zoë Lyle and Edward Miller found their “just right” place as a three-person team at R/GA in New York City. 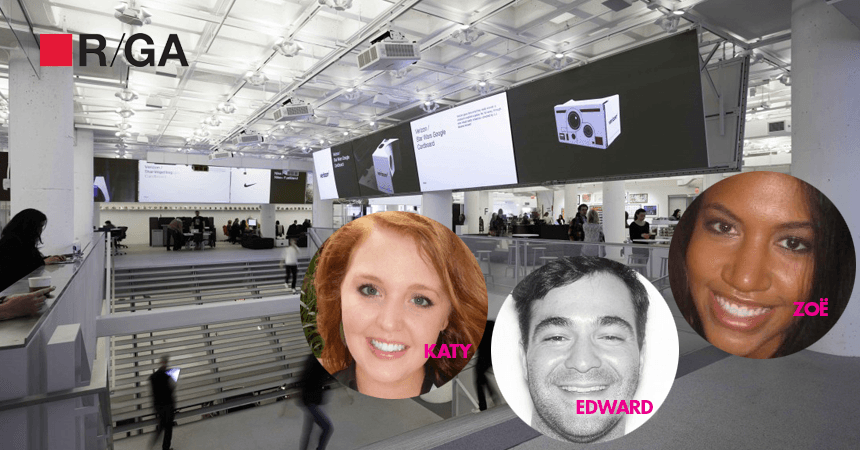 At Miami Ad School, you develop the skills and master the tools you need to start a career you’ll love.

You’ll also need to know what kind of environment you’d love to work in—what sort of scene really suits you—so you can decide what position to accept once you’re done.

Fortunately, you’ll graduate with that knowledge too.

Katy, Zoë and Edward did just that. They took their skills—and their Quarter Away experience— and landed their dream jobs at R/GA. Pippa Seichrist caught up with the trio and got the story on their journey to the place and the roles that were just what they were looking for.

Pippa Seichrist: How and when did all of you meet?

Katy Moseley: Well Zoë and I met through the roommate placement sign up at Miami Ad School, and we’ve been roommates for almost three years now.
Zoë Lyle: We didn’t even plan it, but now we work together and sit right next to each other at work.
Edward Miller: Katy and I were assigned to work together for one of our classes in Miami and we’ve been partners ever since.
“The biggest benefit for me was being able to travel to places I’ve always wanted to go, while getting great agency exposure. Being able to compare different experiences and work environments (both in the States abroad) was really helpful later on when it was time to start thinking about jobs.”

PS: All of you participated in Miami Ad School’s Quarter Away. Where did you go and what was the biggest benefit from that experience?

KM: Zoë and I went to an Agency Lab at Ogilvy Paris. (Agency Labs allow you to attend classes inside an agency with the in-house creative staff as your teachers and coaches. Ed.) Next, we both headed to San Francisco where I interned at MUH-TAY-ZIK | HOF-FER and Zoë took classes. Then I joined Ed in New York and we did internships for JWT and Grey.
ZL: In New York, I did internships with 360i and Ogilvy Mather.
EM: I first went to the Mithun agency—now McCann Minneapolis—then I came back to New York City to do internships at Razorfish, JWT, and Grey. In time, I came to realize that the relationships I made were just as important as the actual agency experience. Staying in NYC helped me meet other people in the industry and continue to build a network. That’s how I got the job at R/GA.
ZL: The biggest benefit for me was being able to travel to places I’ve always wanted to go while getting great agency exposure. Being able to compare different experiences and work environments (both in the States abroad) was really helpful later on when it was time to start thinking about jobs.
KM: What she said!

PS: How have the connections you made at Miami Ad School helped you?

PS: What makes R/GA special to you?

All: Since R/GA’s claim to fame is digital savvy, it’s given us a solid practical toolset with which to execute our silly little ideas. The practical knowledge we’ve gained here has helped guide a lot of our creative executions. Also, all the desks go up and down electronically. Oh, and the lights in the ceiling can change to any color on the visible spectrum, so that’s pretty cool too. 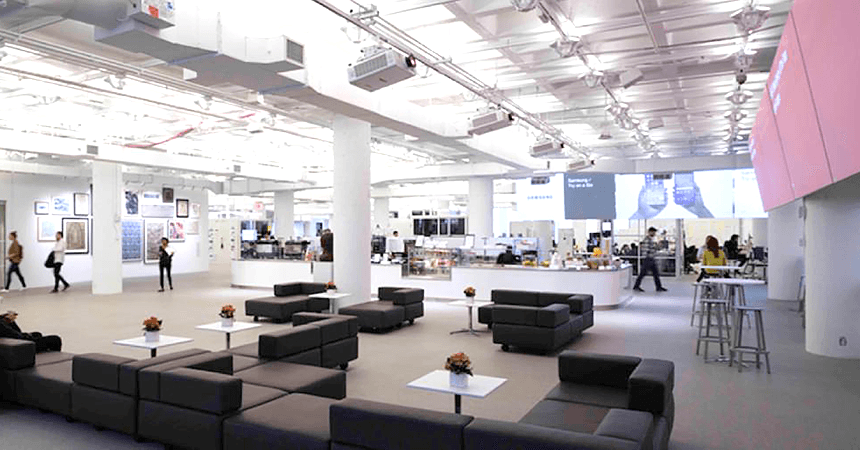 Founded in 1977, R/GA has morphed from a visual effects house and digital film studio to an interactive ad agency to a brand agency for the connected age. R/GA was AdAge’s 2015 Agency of the Year and is number two on the 2016 Agency A-List. This past January, the New York office moved into a revolutionary, 200,000 sq. ft. space billed as the “World’s Most Connected Office.” Barry Wacksman • EVP, Chief Growth Officer @ R/GA is the Chairman of Miami Ad School’s Board of Directors.

PS: Did you feel ready when you started?

ZL: Our first day was a bit intimidating for all of us, I think. But our combined work experience definitely helped with those first-day jitters. Our nervousness went away when we realized we knew how to use all the tools and we had learned how to think strategically. It was still a bit scary, but we weren’t coming in blind since our Miami Ad School Quarter Away experiences had made us familiar with working under tight deadlines, generating concepts, and collaborating with a variety of people with different skill sets.
EM: For sure. But it’s a little different for me since I’m a copywriter. It was more about becoming comfortable with adapting my writing style for different digital spaces—three-to-five-word baby headlines for banners, more long-form stuff for the web, that sort of thing. For Katy and Zoë, they learned to be faster and become more comfortable designing within different digital formats, but they were already well-versed in the nuts and bolts.

PS: How long have you been at R/GA? Can you describe what you do?

KM: Ed and I have been here since beginning of October 2015 and we work as a junior creative team within the Digital Advertising Department of R/GA.
ZL: I started towards the end of October 2015 and work as a visual designer.
EM: Like Katy said, we’ve been here since October 2015. I started out writing a lot of banner ads, now I do a medley of different things ranging from fun, engaging social posts to activations to TV and print—never a dull day. Well, sometimes, but that’s okay too.

PS: What are some of the projects you’ve worked on since starting at R/GA?

All: We’ve worked on Verizon quite a bit. It’s a beast! We’ve also had the opportunity to work on a rebranding pitch for a video streaming app called go90. Now we help run their social account. Check out our posts—and please—participate in our Twitter polls! Besides that, we’ve worked on smaller projects for Samsung, Chobani, and the NFL.

Find the job, the career and the life that you’ll love. Start your creative career. Apply today!