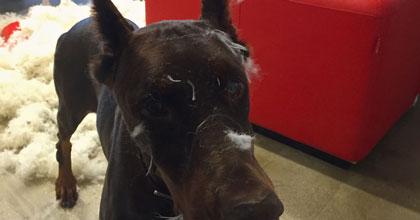 All of Miami Ad School's locations are very dog-friendly places (as are many ad agencies, design firms and companies like Google). Students, instructors and staff are welcome to bring their dogs. The school's founders bring their dogs, currently three, to school everyday. When the dogs aren't in class or playing ball they hang out in Ron and Pippa's offices. Lately the newest school mascot, a Doberwoman, has been very busy redecorating.

The story of the accidental mascot

From my second floor office window I saw in the distance a big brown dog running loose on the street. Big brown dogs are close to my heart because, until recently, the school had always had a chocolate lab wandering around the school. "Fudge" was the school's first mascot. When he passed away the graduates got together and got "Smudge" for the school. You know how storks deliver babies? Apparently pink flamingos deliver chocolate labs, at least that was the illustration one of our grads, Mario Girard, had drawn on the card. The note said, "We can't imagine Miami Ad School without a Chocolate Lab." But after 14 years Smudge had passed away. There are always at least five or six dogs running around the school, but we missed Smudge. He was a real character and a friend.

The school is in the Wynwood business district but only a couple of streets away from a residential neighborhood. I thought the brown dog might have wandered out of its yard and would find its way home. A few days later I heard car brakes screech and looked out my window. It was evening but I could make out a dark, four-legged figure in the distance darting back and forth across the street. It was the dog. I had to do something. Fortunately my teenage daughter, Olya, walked in at that moment. She is my partner in critter-saving. The year before, while on vacation in the mountains, we had spent three days coaxing an abandoned border collie out of the national forrest. We knew if we couldn't catch the cute fluffy dog before our vacation was over the dog would starve or be eaten by coyotes or wolves. Olya and I had to act fast if we were to save this brown dog. We quickly grabbed a can of dog food, an opener and took off running to the spot a block away where we had last seen the dog.

When we got close we saw she had on a choke chain that was squeezing her neck. We figured the collar had been put on her when she was a younger, smaller dog and she must be lost or neglected. She had infections in both eyes and was so thin her face had a skull-like appearance. The fur was worn off of the tops of her paws and her hips. I had seen that before on dogs who had spent their lives living on concrete, without a soft place to lie down. She was skittish and wouldn't come close enough to be petted. Even if she had come closer neither of us would have had the courage to reach out and grab her collar. Her tall, pointed ears and nervous darting eyes made her look ferocious.

We kneeled down and soothingly called, "Come here girl." When that didn't work I reached into the smelly, gooey canned food and tossed a little blop of it about 10 feet away on the ground in front of her. She goggled it up. We took a few steps back and tossed some more food. She moved forward to get the morsel. She was following us! We did this a dozen more times. The whole time the dog was anxious, trembling and wanting to bolt when we moved too quickly. The food was running out and we were still half a block from Miami Ad School. Olya slowly backed up and ran back for more dog food. Over feeding a starving dog can actually kill them but it was our only way to try and save her.

Working together Olya and I coaxed the dog all the way to the school. I held open the door into the lobby and Olya backed into the school plopping extra amounts of food on the floor to entice the dog to go through the doorway. The dog stood halfway through the door for a long time trying to get the courage to walk into the brightly lit room. We had worked an hour and a half and had gotten her to follow us for a whole block. If she would just move one more foot forward I could close the door and she would be safe. When she leaned forward to smell the out-of-reach food I touched the door to her rump, startled, she jumped inside. Safe!

At first she was afraid of people, wasn't house broken, didn't know how to play and would scream and run away if another dog, even a toy poodle, sniffed her. After she had put on 20 pounds and adjusted to family life a man came by the school. "I hear you found my doberman." He said her name was Pretty. We could tell she recognized him but she didn't look at him or go to him when he called her. We told him we named her Nika. When she heard the name we had given her, she trotted over to us to be petted. Panicked at having to give her up we asked, "How much do you want for her?" He said he had an auto repair shop and she was his security dog. He thought for a minute and said, "You can keep her. My shop has been broken into three times." I'm sure if a sofa had tried to break into his auto repair shop Nika would have torn it apart!

If you and your dog would like to go to Miami Ad School, APPLY NOW.