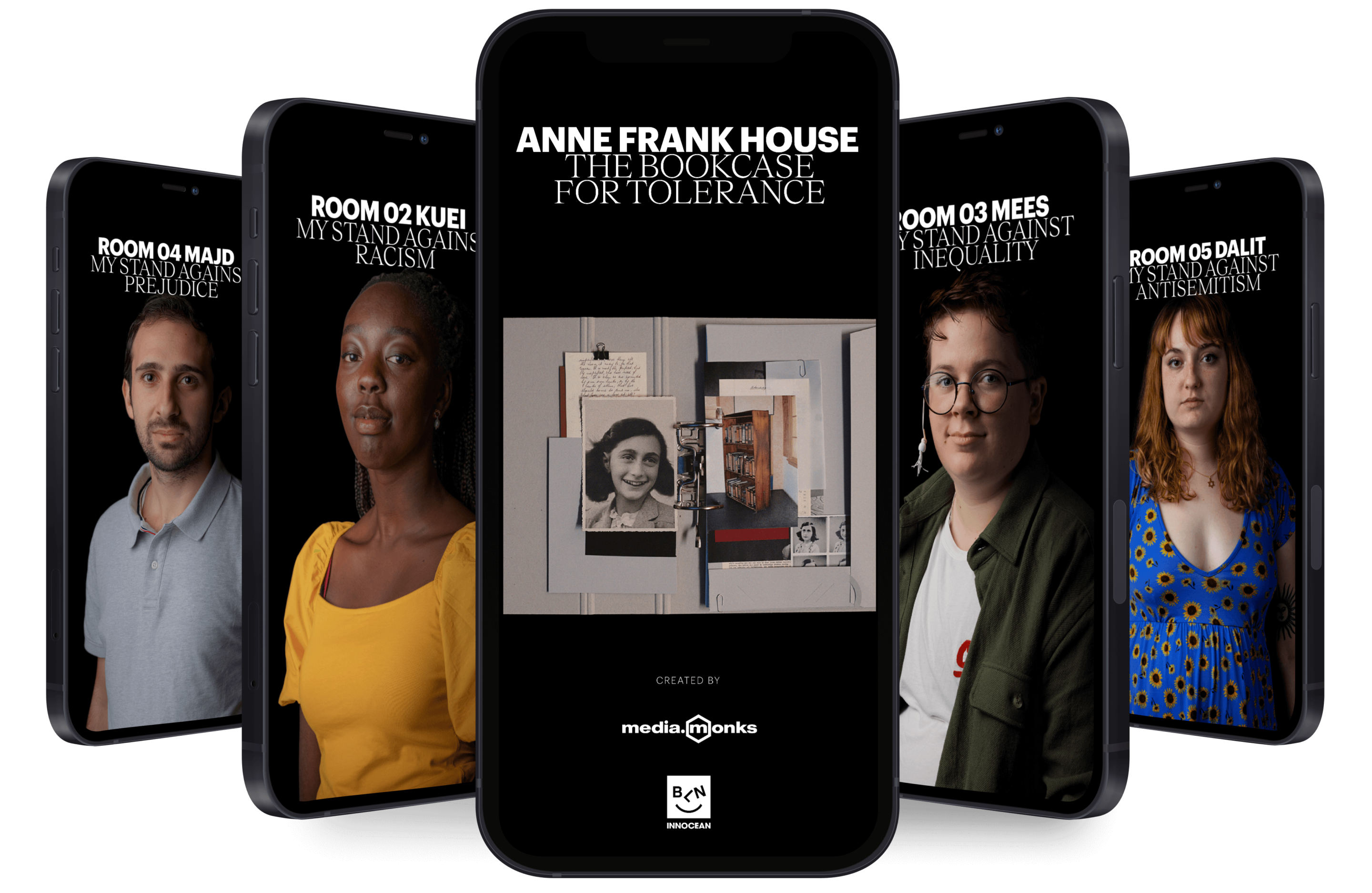 How Does a Viral, Award-Winning Project Happen? We asked 2 grads and an Executive Creative Director.

Every young creative person wonders what it's like to work on the exciting, high-profile work you see in the news. The kind of projects that make waves around the world.

Is it stressful? Where do you start? How does that great, world-changing insight come to be?

The Anne Frank House believes the best way to counter prejudices and discrimination is education. The project The Bookcase for Tolerance aims to achieve that by sharing Anne Frank’s story and modern-day, authentic, personal stories and struggles.

As it goes beyond the textbook – inviting young and older audiences to connect with the protagonists on a personal level – The Bookcase for Tolerance is also a powerful educational tool. On the website, people can access each protagonist’s folder and discover their journey. Through the AR app, they can step inside their rooms, exploring personal objects and the meaning behind them. All rooms were carefully scanned and modelled in 3D.

By engaging with the most cutting edge AR technology available, the team brought Anne Frank's inspiring story to a new generation. It was an opportunity for 3 experts in marketing and storytelling to use their powers to spread a message of tolerance and perseverance.

So, what do they have to say about the project? Let's start by asking the Executive Creative Director himself, Ricardo Wolff:

Q. How does a project like this get started? What happens first?

The first thing is to make sure you get the right team of partners on board. People and companies that you trust 200%. It’s the reason why we turned to Media.Monks in Amsterdam to develop the AR app, MassiveMusic to take care of everything related to sound, Ted Alkemade for the interviews and documentaries, Johan Kramer and Elliot Page for the teaser, Sven Schrader and Yvette De Wit for photography, and Hagens for the PR strategy.

Q. For such sensitive topics as antisemitism and racism, is your approach different? How does that impact your process?

Once we got the team on board, the real job started: finding the right testimonials to open up about each topic. Because, honestly, this project is all about them. Their life stories, their struggles, their learnings. Luckily, together with our friends at the Anne Frank House and the Anne Frank Youth Network, we managed to reach four really special and courageous souls: Dalit, a woman who deals with antisemitism in her everyday life; Mees, a transgender non-binary person who struggles with acceptance and inequality; Kuei, a young black woman who is often discriminated because of her skin colour; and Majd, a refugee living in the Netherlands who still faces prejudice because of his roots.

Q. What were your personal goals for the project?

Living in Berlin, one is confronted with war memorials on a daily basis. You look up and see the Berlin Wall, look down and spot the Stoppelsteiner (literally "stumbling stones") which are tiny commemorative brass plaques placed in front of houses where victims of Nazi persecution used to live – to name a few. Personally, I believe remembering and honoring the past is of utmost importance. But it's not enough. These memorials are there to teach us a lesson: be vigilant, so things like this don't happen again. That's why I always hoped to work on a project that would connect lessons from the past with topics that are happening today. Unfortunately, discrimination reports are skyrocketing worldwide. Fortunately, we were able to do something about it.

Q. Several recent M.AD grads worked with you on this project. What do you look for in a young creative before bringing them on board?

Three things: hunger, commitment, and, of course, ideas. We had several levels of M.AD brains involved in this project: interns, working students, grads, and even teachers. People with completely different levels of experience, age, background, religion, and sexual orientation - all gathered around one goal. It was beautiful to witness.

Q. What are the most important things an intern can learn on an internship?

Well, that depends on the student as much as it depends on the agency. A good internship is the marriage between both: a student willing to go the distance and an agency willing to take him/her there. For us, it means exposing students to the real world with all its problems and opportunities. The real world of deadlines. The real world of crushing feedbacks. If the student gets an idea approved and produced during those three months, great. Even better. But the purpose of an internship, in my eyes, is to leave a positive scar on your professional life. Learning how to deal with pressure, with fear, while at the same time, witnessing the dynamics between the different departments, between creatives and their CDs, between agency and clients. It's that awesome time when you can take all the risks and be held accountable for nothing. A free pass to f*ck it up. What better way to learn?

Q. What are the 3 most important things Innocean does to give the interns such a good experience?

It's all about three things:

Now, seriously, our goal is to offer the best three months in a student's life. And I honestly feel we've been succeeding at this because, from what I've seen, the student that leaves the internship is a very different person from the one that joined. Trust me, I've seen this happen multiple times. And I've only seen it because I'm there, close to them, on the ground, as often as I can.

Right from day one we ask them to be annoying. To ask questions, voice their insecurities. See, I was once a M.AD intern myself - so I do know how it feels. I sort of know what interns want to take out of this opportunity, so our team goes great lengths to offer it. Constant feedback, transparency, respect, honesty, chances at small jobs, but also chances at big jobs. That's a big one for us: idea-cracy. If you crack the brief, your idea will move forward regardless of whether you're a CD, senior, or intern. One last point: fun. Interns go through all the above while having fun. The only fear allowed in the office is the fear or not coming up with ideas, good or bad.

Q. You ended up winning a host of awards for the Bookcase project. What’s your reaction when you hear that you’ll be winning?

This project, more than most I've been involved in, touches on loads of personal beliefs. Not only because it tackles a social disease like intolerance, but how, from a creative point of view, we managed to frame an old problem under a new, immersive light - making it interesting for today's youth. So, yes, I'm really proud of this one, regardless of any external industry recognition. But when it happens, it's surely sweet. It's a weird feeling of realizing that people you've never met actually feel the same way about something that's so dear to you.

Q. What’s it like to work as a young creative at Innocean?

At Innocean Berlin there’s little sense of hierarchy. It gives you a platform where you can easily access everyone around you, not only amongst creatives, but also the strategists, the executives, the producers, the managers. Whatever you may need, it’s there for the taking. You feel the trust and the opportunity to speak your mind, come up with ideas and make them happen. Plus, you’re surrounded by people from all over the world, with different backgrounds and perspectives. It keeps your mind open and inspired. It adds a pinch of spice to every project, the kind that makes your brain tickle.

Q. What did you learn from your work with the Anne Frank House? Any lessons you’ll take to your next big thing?

From the very start we all had the feeling this was a special project. A big challenge we were ready to take on. It was our first big project so there were many learnings, especially how to adapt your ideas and tone of voice around a sensitive topic. We were left with a big lesson on how often you deviate from the main message you want to say. So you must step back, read the brief again, make sure you’re ticking all the right boxes, and move on from there. It’s something we all know, yet we tend to forget. But when you learn to do it organically, the chances are you'll end up with a great project.

Q. What were your goals when working on this project?

Our main goal was to raise awareness around the discrimination many minorities still face to this day. But also, we wanted to honour Anne Frank’s legacy, her spirit of resilience and courage, by providing a platform that enabled young people to speak their mind, while giving others a deeper understanding of today’s issues. And the beauty of it was that the more it developed, the more people were drawn to it. It made us feel that we were going in the right direction, because we wanted to convey that sense of collaboration, which we actually witnessed every single day. It was pretty special to see Johan Kramer jumping on board as well as Elliot Page lending us his voice. That’s when we realised we were doing something right.