4 Hidden Trends From the Ads of Super Bowl LV

Universal events are rare these days.

It seems somehow poetic that Paramount used the Super Bowl to pitch yet another streaming service: the juxtaposition of our forever fracturing media landscape against the one true "Can't-Miss" event we have left.

The Super Bowl is always a cultural barometer. Forever the most popular TV event of the year, it's more than a yearly chance to watch Tom Brady fail to age: it's a chance to see what advertisers think the American public is thinking about. Viewer numbers may have declined since the 2015 peak, but a hundred million sets of eyes is nothing to sneeze at.

So what did this year's class of Super Bowl pitches teach us about the cultural moment?

1. The Ads Don't End When The Game Does

In a deliberate attempt to deconstruct the Super Bowl ad clichés we know and half-love, we have this year's most unique effort: Reddit's 5-second appeal to new users.

As Creative Bloq points out, the ad (structured like an actual Reddit post) likely cost roughly $200,000 per second—but given the platform's recent high-profile involvement news stories (think Gamestop), and the eye-catching design...was it money well-spent? 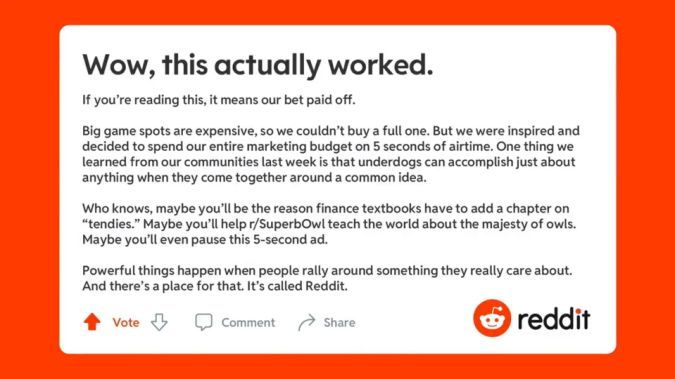 The truth is, most of us spend far more time with screens that are not our TV. The Reddit ad seems targeted to that observation.

Of course, Reddit (and R/GA, the outfit responsible for the strategy) know you can't read all that text in a few seconds. To quote Ellie Bamford, R/GA's Head of Media and Connections, “Squeezing an entire page of text into one of the shortest ads in Super Bowl history might seem weird, but it was certainly weird in the right way.”

It's an ad designed to have you googling after the fact. And that marks a serious trend for big game ad buyers.

Mountain Dew had another notable ad with an interesting concept: the old "jelly beans in a jar" trick. They asked viewers to count how many bottles showed up in their commercial, then tweet their best guess.

Now that's enough to make anyone rewatch after the fact. Said, PepsiCo Chief Marketing Officer, Greg Lyons, “We think that has a chance to be the most-watched ad in Super Bowl history.”

Coors Light, meanwhile, took another approach—skipping the game for a spot in your dreams. They brought in a professional psychologist to help develop a video that could possibly trigger nighttime visions of Coors Light. The allegedly dream-changing video launched on Youtube just the night before the game.

As Molson Coors VP of Marketing Marcelo Pacoa put it, “Targeted Dream Incubation is a never-before-seen form of advertising. Typically for big sports events, we see ads featuring over-the-top car chases, pyrotechnics, dramatic scenery and storylines, but with the Coors Big Game Dream, the dreamer is in the driver’s seat to create a chill, relaxing ad inspired by our visual and audio stimuli.”

All told, it's looking like the smart money is in using the captive audience of millions to drive conversations that last long after the game is over. There's more money in being the story than in playing a small part in the larger one.

Even before the game happened, and the big commercials actually had a chance to air, the real story of this year's historically strange Super Bowl seemed predictable: COVID, and its impact. I mean, such a tumultuous time to host a Super Bowl—you'd be forgiven for expecting big brands to tacklethe issues of our day.

Except...at least on the night of, the ever-present pandemic (and political turmoil) was largely absent from the proceedings.

Sure, in the lead-up to the game a few virus-related decisions loomed large. Budweiser made waves with their decision to drop out entirely. Shortly after, Coke and Pepsi joined the movement and declared their intention to sit the game out.

But mostly what we saw, as the Kellogg School observed, was a deliberate effort to eschew hand-wringing for a moment of distraction.

By and large, brands swung for light-fare: gentle comedy and an upbeat tone. Case in point: one major of the night winner (besides Brady) was Rocket Mortgage, with 2 spots featuring Tracy Morgan. They ranked 1st and 2nd in USA Today's viewer poll for best ads of the night. Also popular was Will Ferrel's playful attack on Norway to the benefit of GM (and their focus on EVs).

This was no accident. Variety ran a story that nailed the phenomenon by putting it simply: it seems like customers are just plain tired of hearing about what's going wrong.

Now that doesn't mean that all companies chose to play nice. But the most notable effort to address the unspoken might just show why so many companies opted for laughs. In a widely panned spot, Jeep teamed up with Bruce Springsteen (making his first-ever appearance in a TV spot) to praise the virtue of "The Middle".

The ad doesn't quite hit...and it's hard to say if that's because of the execution (which is admittedly awkward), or because viewers simply had no time for somber messages in the midst of what seems these days to be a rare celebration. Likely, it was some combination of the two. One thing is certain: Springsteen didn't do himself any favors. Here's what Pitchfork wrote in their scathing review:

"Here he is preaching a vague message of unity while standing far removed from any actual human beings. He is speaking to a promised land that maybe never actually existed. He looks impossibly well-maintained even though he wants you to think he’s weathered and worn from years of manual labor. He is selling you a car."

3. Brands Are Courting Influence More Than Ever

Naturally, the Big Boss is not alone in opening his heart (and wallet) to the virtues of Super Bowl ad budgets. Ever since there's been a big game, there's been celebrities there to hawk glitzy fare. Big names get paid major bucks to flaunt their charisma to the benefit of car companies, beer brands, and the like.

The 2021 edition of football's big night was actually a step up in that regard. According to Carol Goll, Head of Global Branded Entertainment for ICM Partners, advertisers featured name-brand celebrities about 10% more this year than last.

Needless to say, the celebrity endorsement isn't going anywhere. And the appeal of those familiar faces is apparent in many of the round-ups of this year's most successful spots. One major winner was Rocket Mortgage: their 2 spots featuring Tracy Morgan ranked 1st and 2nd in USA Today's viewer poll for best ads of the night. Meanwhile, the leading ad from the Kellogg School's wrap-up had Ashton Kutcher, Mila Kunis, and Shaggy repping Cheetos.

What's fairly new, though, is that other kind of influencer: the internet variety.

This year, Bud Light went for it by flying in DudeWithaSign, the IG personality boasting more than 7 million followers.

As always, though, the appeal of organic influencers to a brand's marketing department (namely, trust and authenticity) can also be their downfall. If you want to see what a meltdown looks like, just check out the comment sections of his last few posts...and you'll see how quickly an influencer's fan-base is ready to revolt at the indication of wonton salesmanship.

Suffice to say, the reaction to Mr. Sign's appearance is (like anything online) decidedly mixed.

You have to wonder how the trend will play out. There's no doubt that influencers are here to stay: and brands are increasingly willing to give them massive paycheques. But will the supposedly accessible appeal of TikTok and Instagram's biggest stars be the reason they fail to convert new buyers?

It's becoming increasingly clear every year: if you want to win the Super Bowl, just bring back an old classic.

It's admittedly a great spot, featuring Winona Ryder, and coming with blessings from his goth-ness himself, Tim Burton. And the response was huge. Chalamet's photo as Edgar on Instagram had more than 3.5 million likes...before the game had even started. On Twitter and the like, some fans are so happy with the casting they're calling for Chalamet (who does have an uncanny resemblance to a young Johnny Depp) to star in an actual sequel.

The Scissorhands spot is not alone, though. Uber Eats brought back Garth and Wayne. In a reference to the 90s classic Deep Blue Sea, Verizon had Samuel L. Jackson get eaten by a shark  And Tide may not have actually name-checked George Costanza, but they may as well have.

Finally, Bud Light got straight to the nostalgic point with an ad paying homage to their rogues-gallery of classic Super Bowl characters from years past.

So, What Can We Take Away?

Google "Super Bowl Ads". Witness the mass proliferation of rankings, round-ups, opinions, and live-tweet reactions (of which this article is yet another). If this year's Super Bowl proved anything, it's that the Super Bowl itself still reigns supreme.

It was also a reminder of the work brands still have to do to reconnect with a population of people who've each been personally rocked by a year (and counting) like no other.

Avoiding controversy and bringing the laughs is one move—but although they provided some much-needed distraction, the ads that did so do seem a little...forgettable? In a way, the year lacked a clear classic.

But, looking back, it may just be that this was the year we saw how TV's biggest draw fits within the new media landscape. As Reddit and others proved, there's more than enough room to reconsider the traditional approach to ads on the silver screen. That might just end up being why the most bizarre Super Bowl in history is remembered.