OK, that was a turbulent start to a year that already looked a little intimidating...but at times like this, it's worth remembering: the night is always darkest before the dawn.

In the spirit of optimism, check out some of the most exciting creative endeavors we found this week.

Notion is collaboration software for business. TikTok is social media for Gen-Z. Together they're...magic?

As The Verge put it, "Five days into the new year, and TikTok’s hottest 2021 trend is teens using enterprise software to go viral."

Folks on TikTok aren't alone. If you take a stroll through the Notion Subreddit, you'll see how people all over the world are making their Notion dashboard part of their personal lives---using it for everything from managing their creative output, keeping grocery lists, and even tracking progress in video games. 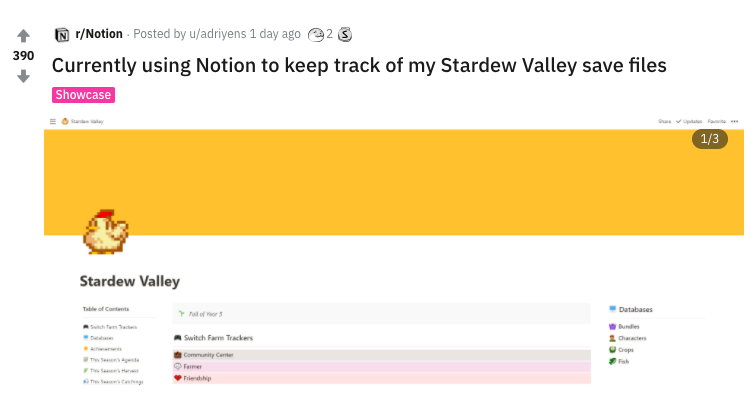 In a mammoth article posted last week, VentureBeat makes a passionate case for rethinking our relationship to Artificial Intelligence, as well as some of the other shiny new gadgets pouring out of Silicon Valley. At the heart of the message: that we should replace the word "artificial" and think more about "augmented intelligence".

For creative work, they argue, some of the biggest advantages could be in the process of recombination: when existing ideas are remixed to create something new. As VentureBeat reports, "40% of all patents in the U.S. Patent and Trademark Office are mishmashes of existing ideas bolted together. Researchers at Carnegie Mellon developed an AI-based approach to mining the patent and research databases for ideas. Their system uses analogies to connect work from two seemingly distinct areas, which they believe makes innovation faster and a lot cheaper. The research shows humans can, and should, play an important role in making sense of the suggestions."

Naturally, the growing influence of AI continues to be a source of anxiety all around the internet. Here's hoping that mental shifts like this can help us make use of the new tool in a way that emphasizes human ingenuity.

A New Year, A New Kind of CES

The Consumer Electronics Show isn't about to let COVID-19 keep them down...instead, they're taking the show to Zoom.

Wired is live blogging the entire thing--so no worries, you don't have to spend a minute on yet another Zoom call to keep up with the news coming out of the conference.

As Quartz pointed out in their newsletter, the unfortunate downside is that we'll all miss out on the usual shenanigans inherent to the show: no chatty robots, "smart" vibrators, or custom-made theme park rides to promote future tech.

A New Look For BK

Under the steady hand of M.AD-ally Fernando Machado, Burger King has weathered the COVID storm. Their motto over the past year: focus on the long-term.

With that in mind, have a look at their gigantic rebrand of almost all visual elements in the BK brand.

It's definitely a digital-first look, with an emphasis on flat elements all throughout the brand. It's also got a distinctly retro feel. As Machado put it, "The source of inspiration was from the logo we had from ’69 to 1999," he said. "The main difference now is that we adjusted the color to make it more vibrant and more like the colors of food. And we adjusted the proportions of the bun to look more like the products that we sell. The font is yummy and round, just like our food."

Building a Music Career in the Digital-Only Era

And finally, since we mentioned TikTok earlier, check out Playboy's (yep that Playboy) investigation into how today's aspiring recording artists rely on TikTok virality to find an audience.

No doubt about it: the music business is still in the midst of some serious change. And in a time when a viral long-boarder with a bottle of cranberry juice can put Fleetwood Mac back in the Billboard Top 10 (more than 50 years since their founding), it's hard to know what will happen next for the big labels.