There's lots to cover, and no time to waste. Dive in for a recap of everything worth knowing in the creative world this past week.

What Our Art Direction Grads Have To Say

It's a common refrain on the internet to bemoan what once was. If you'd believe most commenters on Reddit, the late-90s to early 2000s were a time of unfettered access to information, with freedom and justice for all online.

It's not just the regular folk of the internet who have a problem, though: Sir Tim Berners-Lee, commonly called "the father of the internet" is making noise about reinventing the whole thing. Specifically, he'd like to see a return to the "open web".

The issue, it seems, is data. Berners-Lee and his compatriots feel we've sacrificed too much in the way of freedom and privacy for the sake of supposedly "free" services online...services that, as we all know, have a wanton tendency to abuse that trust.

The story is particularly poignant in light of recent moves from Twitter, Facebook, and others. And it calls some attention to a project called BlueSky, initiated by Twitter but consisting of many social platforms, all with the intention of creating decentralized social media. Like cryptocurrency, the dream is freedom from central control (and the issues of corruption etc that stem from that state of affairs)...but does it face the same issues?

We'll stay on top of the developing story.

Fashion and Our Feelings

The New York Times, Esquire, and the Guardian have started to name the phenomenon most of us know all too well these days: the comfy, misshapen clothes that some of us have adopted to weather the storm of lockdowns.

NYT says that "Hate-Wear" is the stuff you put on even though you'd rather not: torn sweaters, semi-stained sweatpants...the bare minimum, in other words.

Meanwhile, Esquire labels "Sad-Wear" as almost the opposite: the guilty fashion pleasures we indulge in when things outside are frightening or sad.

Meanwhile, the other effects of this going-on-year-long pandemic are also influencing the fashion world in the form of organized frugality. As the Wall Street Journal reports, some fashion influencers are finally calling for less shopping. As so many of us struggle to make ends meet, it would seem to make sense that new clothes go by the wayside.

Too little too late, some would say, but in the mind of this writer a genuinely positive trend. We've all known about the downsides of the international fast-fashion industry for years now...so maybe these hard years at the start of the 20's will prove to be the impetus we needed to start making more conscious choices when it comes to what we wear.

As the writer Noah Johnson puts it in a brilliant piece for GQ, "I’ve always thought that the ultimate aspiration, as far as getting dressed goes, is to wear only clothes made by people you know."

2021: Year of Vaccination - With Vic Parizzotto

Speaking of the internet...

Given the highly-publicized drawbacks of widespread internet acceptance (not to name any names...), it's easy to forget just how remarkable the connections it forges can be.

With that in mind, 2021 brings us a surprising (and uplifting) trend: the modern sea shanty.

Collaborative efforts to revive 400+ year old sailing songs are taking over the video platform....and it's difficult not to be swept up in the joy of it all. For one thing, it's a brilliant example of how people create together, across vast distances, in ways that our pre-internet world just would not have allowed. For another thing, the songs are catchy as hell.Is it an "important" trend? Who's to say? By the metric of sheer popularity, it just might be: CNET reports that songs under the #seashanty tag have more than a billion views, and last week Google Trends tweeted that the term "sea shanties" was searched more than any other time in history. 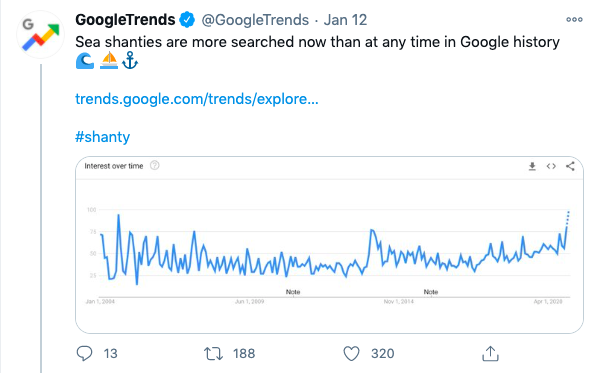 But beyond only the vanity metrics, the songs seem to be making waves in the cultural conversation. Case in point: the New Yorker's long piece charting the history and context of shanties.

A Chief Design Officer for the USA?

In a popular cover story, Wired explores the roll out of half-functional government websites meant to ease the process of vaccination (and sharing other COVID help) around the United States. To quote: "Rapid distribution of urgently needed medical supplies, loans for small businesses, stimulus checks, and unemployment benefits have similarly been delayed by the government’s continued use of outdated technology and confusing digital resources."

The answer? Wired says we need a Chief Experience Officer for the nation---making the case that a good user experience online is no longer a luxury.

It's a suggestion that calls to mind the much-heralded rise of Estonia's "online governance" model...and raises some questions about why we seem to settle for such buggy experiences when it comes to state-sanctioned sites.

Perhaps, though, Wired's call was heard by at least on US governmental agency: the CIA underwent a digital first rebrand last week. The first of many? Time will tell.

OK...so it wasn't actually last week. But as we noted in a past newsletter, Kelsey's Holiday Slay music video is absolutely can't-miss entertainment.

After you've watched that (and picked your jaw up off the floor) check out our interview with the woman herself. You'll get an up-close-and-personal glimpse into the mind of a budding creative.

Finally...
Not a trend, not an observation...just a fascinating tool you might like.
Ever wondered what makes you tick creatively? Sure, you might have an innate sense of what works for you...but maybe you're missing some concrete, outside observations about your creative process.
Enter MyCreativeType, an online assessment from Adobe to help you discover your creative characteristics.
And before you ask: no, this isn't sponsored content. We're just big fans.