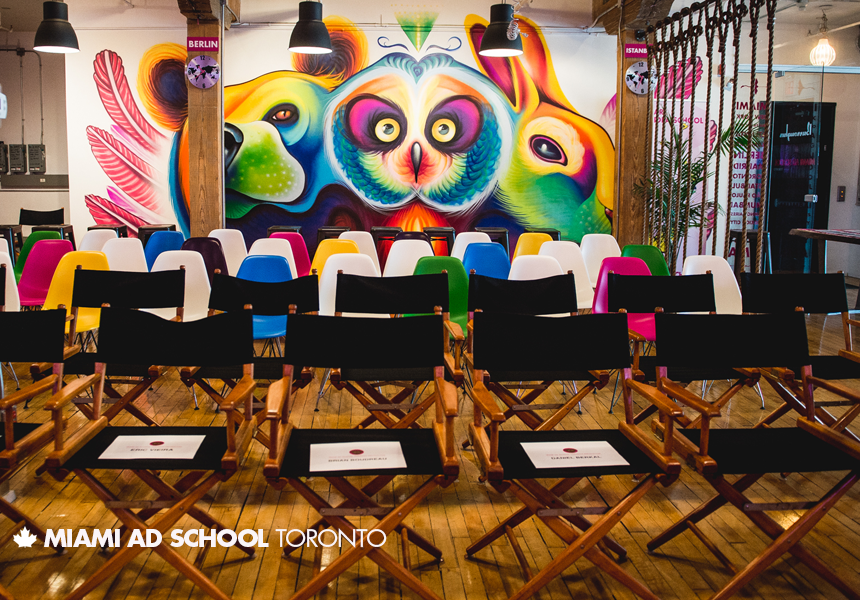 Miami Ad School’s summer quarter is almost here, and with it the first term ever at our new Toronto location.

While our locations in the US enjoy the July 4th holiday, Miami Ad School Toronto will open the doors to its inaugural class of students. Our first school in Canada, the Toronto location has been a long time coming—a Canadian school has been a goal of Miami Ad School since we began offering our students international learning opportunities in the early 2000s. Toronto brings the total of North American schools to six, along with Atlanta, San Francisco, New York, Mexico City and—of course—Miami.

The creative media has been taking notice. Strategy Online places special emphasis on the Boot Camp for Account Planning which is being held in Toronto, as well as New York, during the coming summer quarter.

“A 12-week program running from July to September, the boot camp will have students attend [four classes] per week and hear from industry guest speakers, have portfolio-building sessions and work on live client briefs. Chelsea Thompson-O’Brien, a strategist at Grip and program manager for the course, says the boot camp structure is best suited for students with one or two years experience in the industry and some form of previous marketing degree or diploma.”

"'A lot of the reason for the boot camp structure is for the young professionals who are currently engaged in some kind of agency or company to be able to take the classes,' she says. '... our instructors are practising professionals, which makes a huge difference for us because the program is tailored to the existing ad professional. A lot of our students are ones who would be looking to move from an account co-ordinator position to the lead planner or strategist role.'"

Read the entire article at Strategy.

Stimulant features the “You Are Your Book” campaign created by area agency John St. for Miami Ad School Toronto.

“Miami Ad School is set to begin classes in Toronto for the first time later this year, and it’s showing potential students how the industry might see them differently with a little extra education."

"Created by John St. – whose creative director Stephen Jurisic is also the school’s creative chairman – the print ads show young creatives in a way that future employers probably see them when they first meet for a job interview: a walking representation of the work they’ve done before. And by employing some of the most instantly-recognizable campaigns from recent years, like the home-grown “Like a Girl” or “The Most Interesting Man In The World,” the tattooed and well-dressed CDs of tomorrow get a sense of how that portfolio of theirs could shine a little brighter.”

See the post—along with the with the great campaign from St. John—at Stimulant.