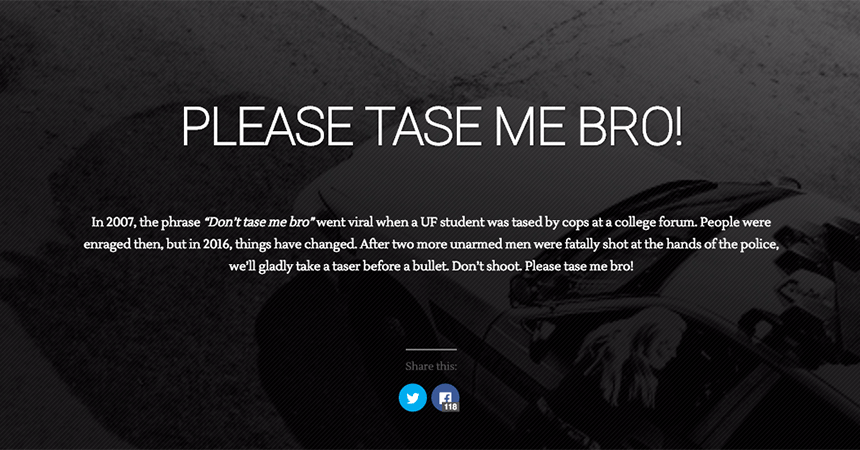 Remember #DontTaseMeBro? Today, in lieu of becoming another casualty, maybe #PleaseTaseMeBro is the way to go.

The events of the past week in suburban St. Paul, Baton Rouge and Dallas have brought the issue of police conduct and armed law enforcement response to the forefront. In the midst of these tragedies, how can we start the process of reconciliation in a nation so divided? How do we address the issues at hand and allow the healing process to begin?

Miami Ad School graduates Gabriel Ferrer and Gabriel Reyes have created #PleaseTaseMeBro, a petition drive that seeks to address the immediate concerns and situations that have led to the current impasse and to help start a dialog that will help move our country forward.

We spoke to the creative team about the development of #PleaseTaseMeBro and what their hopes are for the campaign.

Carlos Vazquez: When #PleaseTaseMeBro launched, both of you elected to remain anonymous. Why did you change your minds?

Gabriel & Gabriel: We’re okay with putting our names on this. It will keep us honest. Regardless of whether this site is successful or not, we plan on sending our petition to every politician that we can. We feel passionate about change in America. We also feel passionate about law enforcement being respected again. We remember the times when cops walked into places and store owners would tell them things were on the house. They put their lives on the line for us and it was appreciated. Now there’s a divide. Too many people think #blacklivesmatter is equivalent to “fuck the police.” It isn’t. If you notice, the letter to the police states, “Please let me believe in you again.” Trust has been shattered. In our country, no one trusts the government or the cops. It’s sad. If we put better systems in place, maybe that can change over time.

CV: This idea takes a very practical approach. How would you respond to those who object that it does not address the underlying social issues?

G&G: I think the site has a two-pronged approach right now. One is to hopefully reach the conscience of police officers so that they think before taking such dramatic action.

We both watched the Trevor Noah monologue on gun violence where he addressed the critique that awareness doesn’t do enough. He then went on to show how in Vegas just raising awareness about the issue decreased violence 36%.

The second is the petition part of it. We outline four measures that we think will help this problem. We want to get this in front of decision makers, but it’s the age of social media. If we don’t get enough signatures it doesn’t matter, as long as enough people talk about it.

CV: Where did the idea to build on an existing social media point of reference come from?

G&G: We were just watching the news and seeing how far things have come. We remembered when people freaked out about the “don’t tase me bro” incident back in 2007. We said people nowadays might beg to be tased and, as simple as that, the phrase “please tase me bro” came up and we bought the domain that night. We think using something clever with some social equity might get people to react.

There are a lot of positive things happening with the #blacklivesmatter movement, but there is also a lot of desensitization. This is just something new to put things into perspective. We don’t think anyone in their right mind would beg to be tased. We know that in many instances it really isn’t a proper solution for law enforcement (distance, danger, etc.) but again, this is a conversation starter.

CV: Where would you like this campaign to take the dialogue from here?

G&G: We hope to take this to the extreme. The site is controversial. It will rub many people the wrong way unless they immerse themselves in the message. It’s meant to get people to say WTF. This is how bad it’s gotten—that someone in 2016 might beg for the very thing that a guy in 2007 begged not to get. To be shot with a Taser.

Add your voice to the solution. Sign the petition here.