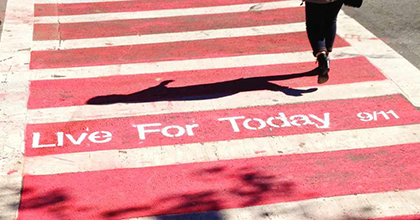 A group of Miami Ad School students took to the streets of downtown New York City in the early morning of the 11th of September. They came to remember and leave simple message.

In the pre-dawn hours of September 11, a small group of Miami Ad School New York students met in the Financial District, near the One World Trade Center tower. There they split into teams and—equipped with stencils and chalk paint—set out for the crosswalks surrounding Ground Zero.

They came to commemorate, memorialize and to leave a simple message, “Live For Today.” They completed their work under the watchful eyes of the NYPD. Police officers first confronted the students, thinking that a group of youths with spray cans and stencils out in the middle of the night “were up to no good.” Then, on closer inspection—and after a few questions and clarifications—they actually embraced the students, overwhelmed upon realizing what the young people were actually up to that early fall morning. 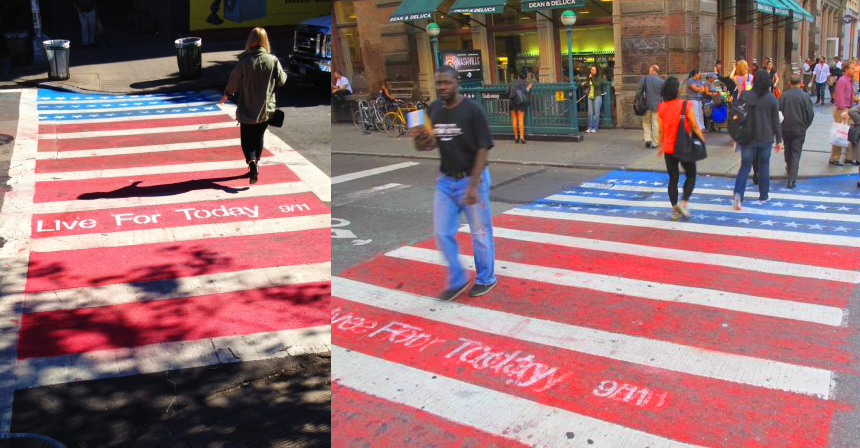 The sky began to brighten with the approach of sunrise. As the first pedestrians of the day began to make their way to work, the students were already on a sleepy subway ride across the East River. They left nothing behind but a gesture that would live on that day—then disappear. Fleeting, like life itself.

To this day, those students have remained—intentionally—anonymous. However, on this the fourth anniversary of “Live for Today,” we can reveal the names of who gave of their time, their sleep and their love for this event: Austin Arnold (now an art director at Havas Worldwide), Bárbara Bandres (copywriter at The Community), Jaime Flynn (art director at Cramer-Krasselt), Eric Gorodetsky (copywriter at Mekanism), Anja Michel (art director at TBWA/Heimat Berlin), Brenna Pileggi (copywriter at Yamamoto), Charlie Schneider (copywriter at FCB Health), Keri Tan (freelance photographer and art director) and their instructor (and film producer and director), Stefan Haverkamp.

“That the powerful play goes on, and you may contribute a verse.”

Meet Brittany Petish, a Senior Art Director and a

Do you feel like you’re ready to become a creati