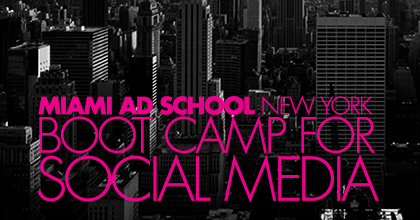 Learn from the rockstars of the business. Miami Ad School’s next Boot Camp for Social Media is in New York. Apply now, deadline is August 29th. 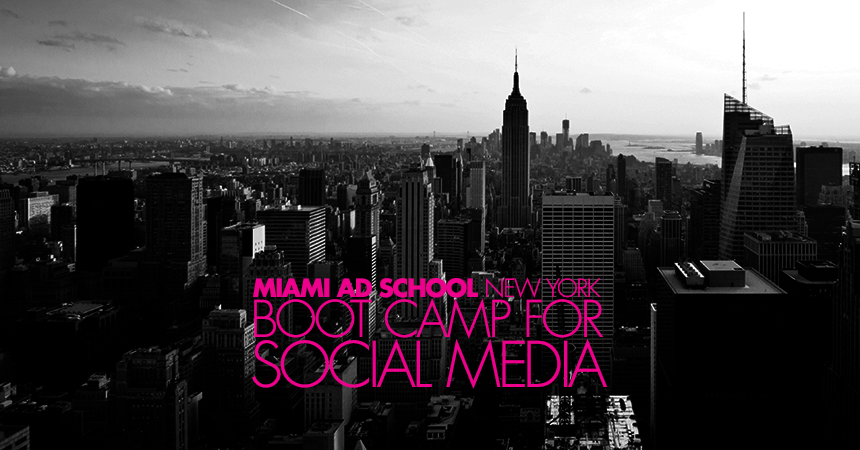 Miami Ad School’s Boot Camp for Social Media is coming back to New York by popular demand. Everyone’s been asking for it, so we’re making it happen!

Right now, there are nearly 2 billion active social media users on this planet. Do people even need training in social media skills? Anyone can do it, right?

The truth is not so simple. Millions of people tweet every day. But using Twitter to draw the attention of millions of people isn’t so easy. One of our grads created a Twitter hashtag campaign that generated 3 million visits to a new website within two days of launch.

Twenty-three million people use Pinterest everyday. But creating a way to reach that audience with your message isn’t exactly a cinch. Two of our grads came up with a campaign that helped launch a new Pinterest feature, raising thousands of dollars for charity and earning America’s leading spray paint company nearly $3 million in earned media exposure for a $200,000 investment.

To be successful in social media marketing you have to know more than how and where to post. It’s a career that demands a mind that is both creative and analytical. Creating successful campaigns means not only knowing when the best time to post on Facebook is, but knowing who your best audience is, what they’re interested in and the kinds of content they’ll be most likely to engage. If you’re able to answer those questions today, that’s great. The answers will be different tomorrow.

In a field so integral to today’s advertising industry, few seem to have a real grasp of what professional social media management demands of strategists, creatives and brands.

World-class learning demands instructors who are leaders in the industry. If you aspire to be the best, you need to learn from the best. It’s just that simple. At Miami Ad School’s Boot Camp for Social Media, you’ll learn from social media strategists, managers and creatives at the top of their fields. They’ll teach you the theory—and the practice too. You’ll actually learn the “ins and outs” of the job you really want, so you’ll be fully prepared to produce stellar KPIs from day one.

Watch the Miami Ad School blog for more information each week as the Boot Camp for Social Media draws closer.

Learn what it takes to be a social media professional. The application deadline for the Boot Camp for Social Media is August 29th.