Take a Stand for Racial Harmony: Join the 1Nation Generation

1 Nation Generation, A Finalist in Miami Ad School’s Unity Initiative, Asks You to Join the Movement for a Nation United Against Racial Discrimination

In the past year, the issues with race relations in the United Stated have come into stark relief. While many wring their hands and wonder what can be done, the fact is we need action now. While there is no one “end-all, be-all” solution to such a longstanding problem, there are things we can do right now to help move our society in the right direction.

Miami Ad School students in Atlanta, Miami, New York and San Francisco developed projects to promote understanding and racial unity. Student teams came up with over 100 unity initiatives. Judges who are leaders in industry, government and advertising, selected the top seven. Now it’s the for you to be the judge. Vote for the best idea. To help you decide, we’re featuring each finalist in a blog post of their own.

A Miami Ad School Atlanta @ Portfolio Center student design team, Mary Elizabeth Morse and Caroline Skarupa, created a movement and a t-shirt, that would allow anyone to publicly declare their commitment to a nation free from divisiveness and racial rancor, and join the ranks of the 1 Nation Generation.

How did you approach this assignment? Did you find it intimidating? What Was your primary motivation?

Caroline Skarupa: In the midst of recent tragedies, we began by brainstorming through a series of questions together: How can we use our creativity to be a part of the solution? Is there a message that allows people to peacefully express themselves and make a difference? How can we start the process of reconciliation in a nation that is so divided? To tackle such a complex issue was very intimidating. We wanted to make sure our message was clear and included everyone in the conversation. No matter your race, religion, sexuality or occupation—we wanted to stress that everyone deserves the same amount of respect. Motivated by this idea to spread empathy around the country, 1 Nation Generation was born.

What was the genesis of the idea?

CS: The idea of 1 Nation Generation came to me late one night I while was texting with Mary Elizabeth. We were brainstorming, texting back and forth. As I was typing out the word “discrimination” I focused on the last part of the word—“nation” Realizing there was something there, I quickly wrote it down, crossed out “discrim” and changed the “i” to 1, and sent a picture of it to Mary Elizabeth.

It was exactly the message we were trying to send—in order to heal, we need to end discrimination as a unified nation. We decided to call our project 1 Nation Generation because we wanted to focus on our generation, the millennials. It is our generation that can talk to our parents and family about discrimination and why this violence is happening—as well as educate future generations. We believed the best way to reach our generation was through social media, so we created a Facebook account, as well as an Instagram page. We shared the pages through our personal accounts and encouraged those who also supported our message to like and share the page, video or images from the accounts. As an additional option for those looking for a way to help the nation heal and initiate change, we designed t-shirts to sell. We decided to donate the proceeds of the sale of these shirts to the UnitedWay because our message ties in with their mission to Live United.

In the end, what do you want 1 Nation Generation to accomplish?

CS: Our goal for this campaign is to encourage people to have a real conversation about subject of discrimination in our country. We hope such a frank discussion can change perspectives, opinions and—ultimately—behavior.

How do you see 1 Nation Generation developing beyond the t-shirts? How do you keep the dream alive?

CS: In the future, we would hope to expand our message with other merchandise, such a bumpers stickers and hats. We would also like to expand on to other social media platforms, such as Twitter, to foster discussion, and to partner with prominent community members that will support and share our message of hope, amity and unity. 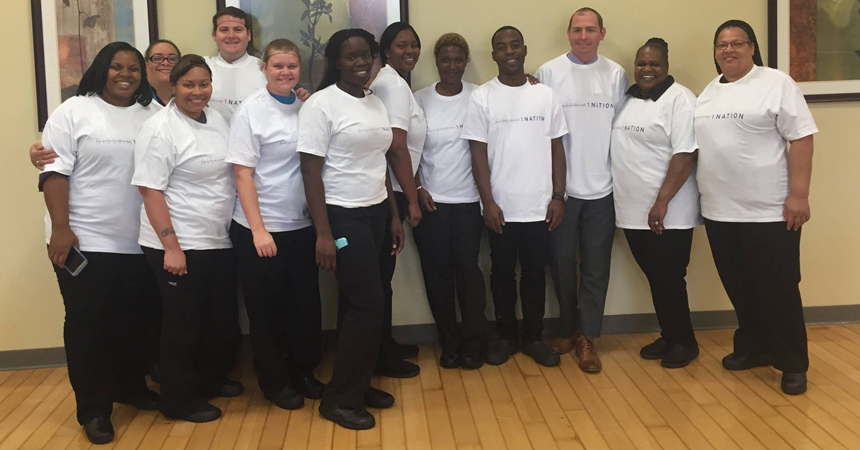 “Baton Rouge General Nutritional Care Team members wear their 1 Nation Generation shirts with great pride. Many of the employees and their communities were affected by the recent violence in Baton Rouge, LA and were very excited to express their support for the victim’s families. Many employees loved that the logo represented everyone and included all races, religions, sexualities and communities. They expressed that, ‘We are all in this together.’”

We can be one nation, undivided. Vote for 1 Nation Generation here.