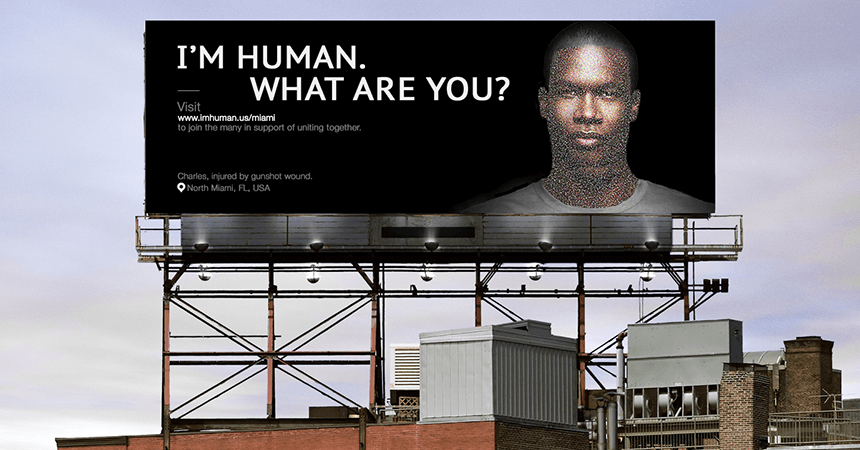 A Miami Ad School Unity Initiative finalist, “I’m human. What are you?" asks us to embrace what we all have in common. 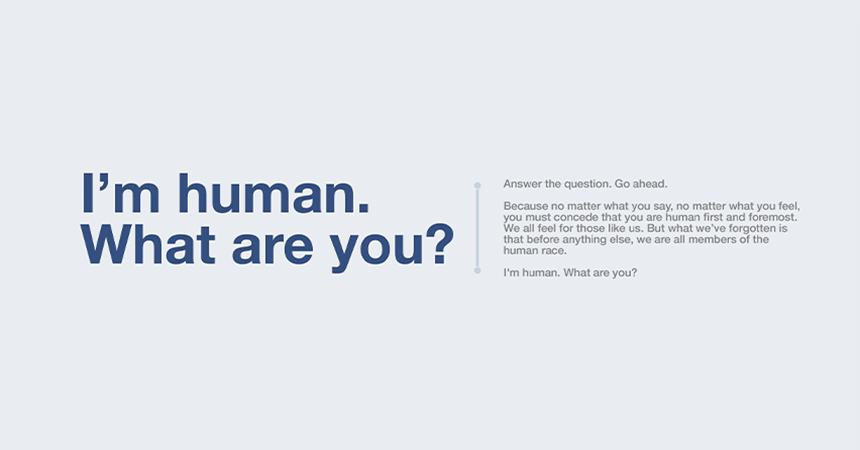 Too often, it seems like case of “us vs. them.” Race relations in the United States may have been worse at other times since the height of the civil rights movement, but it sure doesn’t feel like that way right now. The issues seem insurmountable. Attempting to do something can feel like the definition of futility.

But, the thing is, there isn’t one “something.” We need many “somethings.” Efforts that can influence our outlook and our attitudes about each other. Things that can move us to a place where unity can become more than something we aspire to. Unity can become our shared reality.

Miami Ad School students in Atlanta, Miami, New York and San Francisco developed projects to promote understanding and racial unity. Student teams came up with over 100 unity initiatives. The judges, all leaders in industry, government and advertising, selected the top seven. Now it is time for you to be the judge.  Vote for the best idea. To help you decide, we’re featuring each finalist in a blog post of their own.

Miami Ad School San Francisco  copywriter Matt Tennenbaum and Miami art director Yeiniz Nevarez Oilvo came together and quickly realized that, at the root of all of this divisiveness, was the fact that we’d forgotten one very simple thing. We are all human. What more do we really need to come together?

Related Post: Vote for Peace: Which Idea Can Help Heal the Racial Divide? 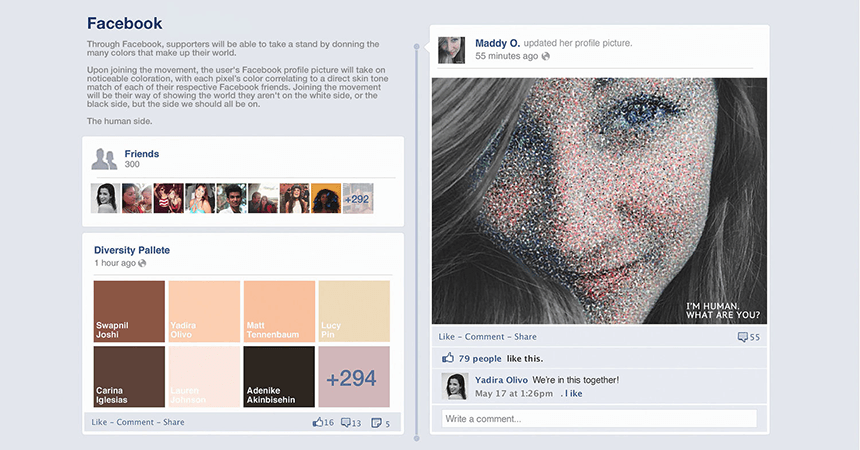 FACEBOOK: Through Facebook, supporters will be able to take a stand by donning the many colors that make up their world.

Upon joining the movement, the user's Facebook profile picture will take on noticeable coloration, with each pixel's color correlating to a direct skin tone match of each of their respective Facebook friends. Joining the movement will be their way of showing the world they aren't on the white side, or the black side, but the side we should all be on. The human side.

What was your reaction to the Unity Initiative brief? How did you begin your conceptual process?

When we first heard about this project we immediately became excited about the prospect of developing an idea for such an important national issue. Like many people, we have friends from a wide array of backgrounds and began to think of all these people in our lives and how race, upbringing, and socioeconomic status play such a large role in how we view the world, our past, our future potential and even who we are as individuals. After hearing the stories of each of these people in our lives, it quickly became apparent how important it was to find a way to get people to look beyond our differences and bring our world together. Few of us live in a completely black or white environment. Our personal worlds are made up of many colors. We are all transformed and enriched by the diverse and unique human beings we share our lives with. 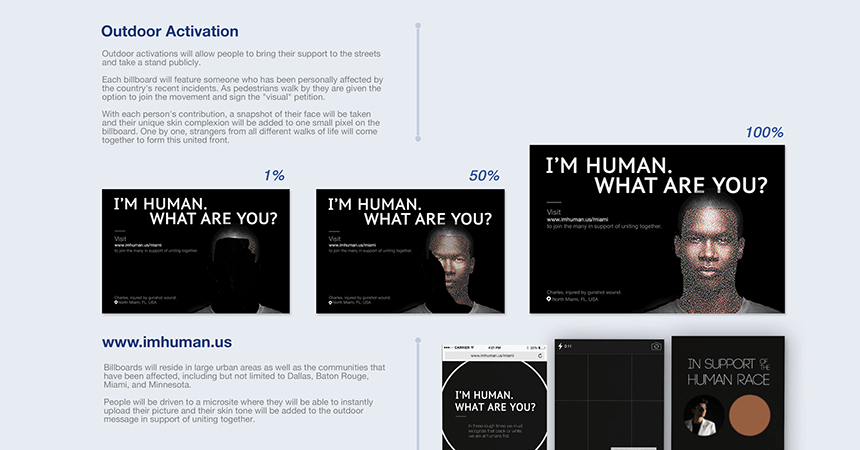 OUTDOOR ACTIVATION: Outdoor activations will allow people to bring their support to the streets and take a stand publicly. Each billboard will feature someone who has been personally affected by the country's recent events. As pedestrians walk by they are given the option to join the movement and sign the "visual" petition. With each person's contribution, a snapshot of their face will be taken and their unique skin complexion will be added to one small pixel on the billboard. One by one, strangers from all different walks of life will come together to form this united front.

WWW.IMHUMAN.US: Billboards will reside in large urban areas as well as the communities that have been affected, including but not limited to Dallas, Baton Rouge, Miami and St. Paul. People will be driven to a microsite where they will be able to instantly upload their picture and their skin tone will be added to the outdoor message in support of uniting together.

What kind of thinking lead to your primary insight?

We put a great deal of time and thought into the people that make up this world and how our environment plays a role in shaping who we are and how we feel about ourselves. Nearly every person, whether through their heritage or their own personal experiences, has been part of a group that has faced some form of discrimination. Then we began to think about how throughout history, when groups of people are put in a tough situation they, time after time, come together as one.

This idea began to consume us as we delved deeper into this project. As upsetting as some of the issues are, there was always a beacon of hope and almost a beauty in the unity that we observed in people when they had been forced to band together by circumstance. As we thought about this more and more we thought back to how almost all people have found themselves in this situation at some point in history. 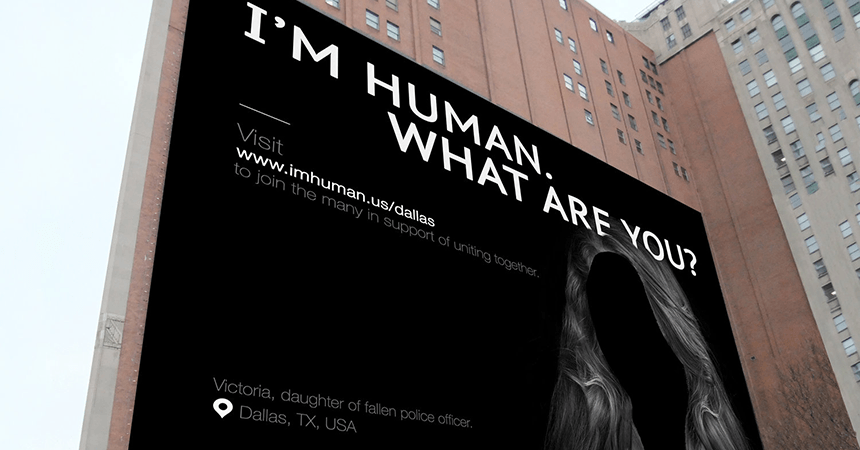 We thought about our country and our world today. The tension between black and white people in this country has gone on for far too long. But why are we so divided? Black or white, we are all human beings first. People look at their skin color and connect with those with surface similarities, but at our core we are all human beings, and there is simply no denying that.

From here it was so overwhelmingly clear that this must be the platform from which we would speak to people. No matter who you are or where you're from, you have no choice but to acknowledge that we are all one. We are all human. It is time we stand together.

What specifically would you like I’m Human to accomplish? What do you want people to walk away with?

We would love for people to simply answer our question: "I'm human. What are you?" Coming in contact with this campaign, we want the idea to be put into your head, “We are all human beings. We are one human family and we should unite together.” From here we hope people will share this bond and stand behind all their fellow humans. If we can help this message to spread, people can take a stand together. Bringing us one step closer to uniting the human race.

We asked ad industry luminaries, government officials and community leaders for their opinions on the Unity Initiative finalists. Adobe's Dave Werner voted for "I'm Human. What are you."

Healing the rift between us begins with acknowledging what we all share. Vote for I’m Human. What Are You?