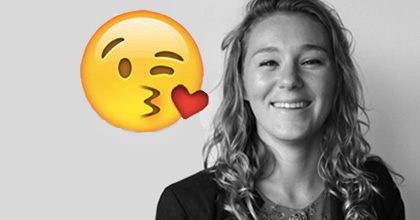 It’s Just Like the Cannes Film Festival but Instead of Brad Pitt, Dave Droga Will Be There

Maddy Kramer, a Miami Ad School graduate, will be there too along with some of the most creative women on earth.

Dave Droga is one of the hottest creatives in the world. While he is pretty darn cute, what makes him so hot is his creative mind and the work he and his ad agency creates. (Droga5 was named Agency of the Year.) Later this month many of the world’s top art directors, copywriters, designers, strategists and developers will be in France for the Cannes Lions’ Festival. It's like the Cannes Film Festival but instead of the best movies, the Cannes Lions’ Festival recognizes the power of creativity and celebrates the people shaping the future of creative brand communications.

Maddy Kramer, Miami Ad School graduate and Interactive Art Director at Latin Works, will be there too. We always knew Maddy was amazing so it doesn’t surprise us that the Cannes Lions’ Festival selected her for the See It Be It programme. (It’s a French event so they spell program funny). Only 12 women creatives from all over the world were chosen. See It Be It aims to highlight very talented creative women in the industry, accelerate their careers, expose the powers these women bring to their work and encourage agencies to nurture women’s careers.

"For years women have been underrepresented in agencies, resulting in work that is more reflective of a singular, male view of the world than of reality. The solution to gender inequality is a cultural change. Marketing does not just reflect this culture – it shapes it. If we want to see a more inclusive, realistic representation of gender in marketing, we need more diversity in agencies." — See It Be It 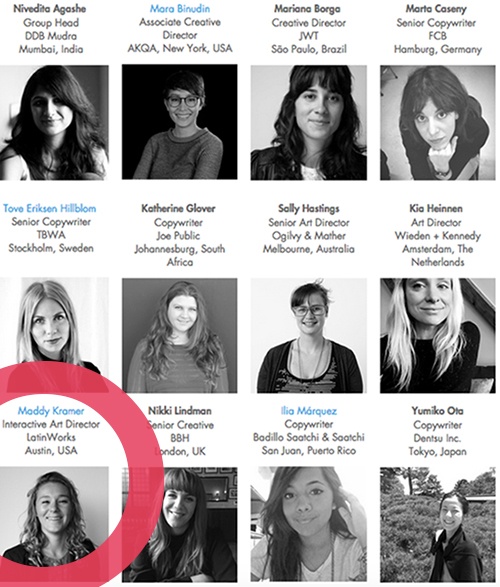 The Cannes Lions’ Festival, along with other organizations like the ADC and The 3% Conference, is tackling the issue of gender inequality in the workplace. (A big THANK YOU! from the 57% of Miami Ad School students who are female.)

Before Maddy hopped on a plane to France I asked her a few questions about her career, being creative and what excites her most about being selected to go to Cannes.

Pippa:  For young people thinking about starting a career in this industry, describe what an interactive art director does.

Maddy:  An interactive art director uses social media, microcontrollers, commercials and anything and everything else to create concepts that will invite the audience to play and have fun with a brand. I’m very passionate about technology, which is useful when bringing an idea to life. The most important thing is to have fun, love the craft, be persistent and always kick ass.

Pippa: What about your job makes you want to wake up in the morning for work?

Maddy:  I love the rush of making something new everyday, that there’s always a chance to improve an idea. I believe that ideas that transcend can actually change the world and do good.

Pippa: What’s the most important thing you learned at Miami Ad School to prepare you for your career?

Maddy:  I learned to have a thick skin, to be prepared to fail hard and come back to the rise the next second. Also, you should surround yourself with the best creatives in school because chances are they will become the best out there. It’s all about pushing yourself, there’s always one more idea around the corner. Internships are the best way to get your hands dirty.

Pippa: What is your favorite part of your job?

Maddy:  I love to concept, and be around people who inspire me. One of my favorite parts is that after long hours of work and months into every detail of a project you get to see your idea come to life.

Pippa: You’ve been very successful in a short period of time. Do you have any advice for young women getting into the business?

Maddy:  Sometimes you will be in a room full of guys, embrace it. You are there because of your amazing work, not because of your gender. Career wise I will have the same advice. Go fail hard, try harder, and fail again. Don’t stop at what you consider success. If you reach a certain objective, then set your eyes on the next one. Don’t get distracted by titles. I don’t feel like I succeed yet, but I can tell you I did fail hard. After being a junior art director at Conill Saatchi & Saatchi, I moved to NY to do a summer camp at ITP. Learning more about technology was my objective. How hard could it be to get a new job after that, right? Well, it was 50-interviews-and-8-months hard. I pulled myself together and decided that I was not a quitter and something amazing happened; I won the Cyber Young Creatives Competition and ended up at one of the leading hispanic shops, LatinWorks.

Pippa: Why were you selected for the See It Be It Initiative?

Maddy:  See it Be it was looking for young women that are passionate and involved with the industry. People who believe that good creatives are not defined by a gender role but by good ideas. The requirements asked for awards and good credentials, and I’ve worked hard to have both. They were looking for someone who stands for gender equality. I’ve been volunteering at the Hispanic Creative Circle for the past three years, at a tech space for kids in LA, and even tried to start “Creative Mornings” in Miami. All of this to push for gender equality via actions not words.

Pippa: What will you be doing while at Cannes?

Maddy:  I’m looking forward to meeting my fellow See It Be It colleagues, to learn from their experiences, get inspired by their stories and to come back with a new perspective of how we can keep the conversation going and inspire young woman to stay in the industry. While in Cannes I want to walk through the Palais and see the best creative ideas of the year.

Curious about what it’s like at Cannes? Just ask Maddy. She’s going to be reporting for us from Cannes; sharing the things she learned and the things that inspired her. If you have a question post it below.